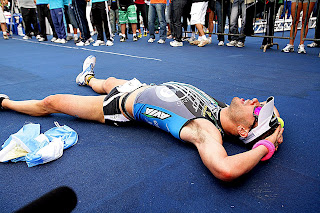 Griesbauer and Sturla take Brazil
Another Ironman Brzil is in the books and it was display of great competition and race tactics in both the men's and women's fields on the Island of Florianopolis.

In the men’s race, we saw a number of the favourites exit the water within striking distance of the lead. The usual suspects were present and accounted for the start of the bike; Eduardo Sturla, Reinaldo Colucci, Frederico Monteiro, Raul Furtado and Fabio Carvalho, to mention a few. For the first 20 kilometers, Colucci wanted to put everyone on notice that he was serious about his focus on Ironman distance racing by assuming the lead. During the initial stages, Sturla chose to stay just off the back of the pack that had formed, and at one time it appeared that he was fading as he fell two minutes behind the lead. Then, in a matter of minutes, the Argentinean surged to the front, setting a blistering pace that eventually only Colucci could match. Over the next 140 kilometers they put their stamp on this race and pulled away. It was apparent after 90 kilometers this was only going to be a two man fight. It wasn’t until there was 20 kilometers to go that tactics changed. Was it Sturla forging ahead or Colucci attempting to save himself for the fight on the run? Colucci either did not, or just could not, respond to Sturla’s speed on the bike.
“I have never put that much effort into a bike ride in an Ironman before,” said Sturla. “I am so happy to break the bike course record again by so much.”
He went on to show great respect for his constant shadow for the majority of the bike by saying, “Colucci is very strong, very fast and good athlete, and he stayed with me until near the end of the bike.”

Sturla hit the marathon with a five-minute cushion in which Colucci matched for the first 10 kilometers. The tall and lanky Brazilian was unable to eat into any of the lead Sturla had established.

By the halfway point of the run, Carlucci’s running legs started to leave him in a big way. Unaware of what was occurring behind him, Sturla methodically pounded out consistent mile after mile while the 23-year-old Colucci started to faultier. What was once only a five-minute gap quickly escalated to become seven, then nine and eventually 15 minutes behind Sturla. Colucci found himself contending for second with a hard charging Petr Vabrousek and Ezequiel Morales behind him.

Sturla finished the race in 8:13:39, wiping out his own bike course record by five minutes, and establishing the second fastest overall time for this course. Colucci hung on to second with an 8:28:08 followed by Petr Vabrousek rounding out the top three in a time of 8:37:18
Sturla now has three Ironman Brazil Championships and wants to go on to improve upon his 10th place showing at last years Ford Ironman World Championships.
Postado por Eduardo Martin Sturla às 07:54